Parked in his old Chevy pickup, the fisherman watched the incoming tide as it swept against the shores of Mud Bay. He was looking for any  sign of a Silver Salmon, but to no avail. Too windy. Have to find somewhere more calm to fish, he thought to himself. He turned his truck around and began driving South toward the end of the spit, dissecting the shoreline, back bays, and points as he went – looking for flat water. He chose a spot he had never fished before. Might as well make this a scouting trip. The man knew it wasn’t going to be a banner day for salmon snagging. It was only August 8th – too early for there to be large numbers of salmon arriving at the spit. No matter. The man had the desire to try – even if for only a chance or two.

After five summers of chasing all five of the salmon species, the man had arrived at snagging as his favorite method of fishing. Trolling was too boring for him, with half of the fight gone out of the fish before the pole is ever in the hand, and endless hours of driving to and fro. Fishing with a bobber? Just about as bad as trolling. Now casting, the fisherman could tolerate. But salmon are fickle critters, and getting one to bite a spinner or a spoon can take hours of casting – sort of like musky fishing. And the man had had quite enough of THAT.  Consequently, the man loved snagging his salmon. Imagine having miles of beach all to yourself – with salmon swimming up and down the shore. Some would be jumping. Others would be pushing a wake in the shallow water. The challenge comes in casting a weighted treble hook precisely over, and ahead of the unsuspecting salmon, or school of salmon, then jerking hard – and impaling the salmon on the hook before it can disappear into deeper water, or alter it’s course to take itself out of casting range.

Having parked his truck, the man approached the calm water, and began scanning for any sign of fish. Decades of experience had taught his eyes to rove slowly, left and right, and identify the wave pattern created by wind, tides, and current. Amidst that, he looked for irregularities. Sometimes it could be glaringly obvious – like when a salmon jumps clean out of the water, and betrays its course, and the presence of its pals below the surface. Other times, it would be the most subtle of waves that goes against or across the waves that are created by wind and tides. It was this that the fisherman loved – the hunting aspect of this type of fishing. Spotting movement. Detecting a fish. And catching that individual with a precise technique.

20 minutes went by. The man spit BBQ sunflower seeds, and drank a Coke as he looked for his first target, and then it appeared: a single salmon, swimming left to right – a reasonable cast from the shore. The man was already standing with his bail open, finger on his line, ready to cast – as a hunter would aim down his rifle barrel, with his finger ready on the trigger. His eyes determined the fish’s course, depth, and speed. He cast what seemed to be an accurate throw, but jerked too soon, causing the weighted treble to pass over the salmons back. The man reeled in quickly, running parallel to the swimming salmon as he did so, cocking his pole, and throwing instinctively to the fish as he ran. Over and over, he did this, until the salmon had disappeared from sight.

A single fish is a hard target. Imagine trying to connect with a fish only two feet long, as it swims by at up to 150 feet away, at unknown depth and speed. One would have to be incredibly skilled to pull this off with any consistency – and yet, the man did this from time to time. Not every time, mind you – but often enough to keep him coming back. To keep him wanting more. This time, the man was a little perturbed. He took pride in his skill, and felt that he should have harvested that salmon. But then he decided to cut himself some slack. I’ll keep practicing. I’ll get the next one, he told himself.

The man trudged back to his original lookout post, stumbling on the rocks a time or two because he refused to take his eyes off the water. He simply couldn’t abide by missing an opportunity. Not five minutes later, his stumbles, his efforts, and his persistence were soon rewarded with a wonderful sight: 50 yards down the shore, a very obvious school of salmon pushed toward the man. His heart leapt. He knew this for what it was – a solid opportunity to score a great fight, not to mention a couple meals of tasty fish for he and his wife. The man ran eagerly toward the approaching fish, knowing that any ground he could gain would give him extra room for casts, should he need them. Like a flock of migrating geese – the first salmon pushed a “V-shaped” wake, with his comrades following closely behind – a disturbance in the water caused by displacement from the mass of fish bodies that followed behind and below the first salmon. The man had been running toward the fish, but suddenly poured on the brakes, and cast his treble directly over and in front of the lead salmon. He paused briefly, to let the hook sink, and to let the fish swim into place, and he somehow knew that when he swept his pole hard from right to left, he would be connecting with a fish.

What a feeling. The man loved that precise moment when his brain conveyed the message that indeed – his hook had struck home! The salmon went ballistic – alternating between jumping and tearing out drag. It was several minutes before the man slid the tired salmon onto the rocky bank. It was a fine hen silver, weighing about six pounds. The man admired the fish before dispatching it quickly with a rock to the fish’s head. Then he slit its gills to bleed the fish out – which makes the filleting process much less bloody.

After that, the man continued looking for more salmon. He saw some individual fish from time to time (which he tried for, of course), but the incoming tide was making the water deeper, and the single fish were harder to detect in the waves. No more schools of fish presented themselves.

A single mallard flew overhead, followed by a pair of widgeon. The fisherman paused to enjoy watching a woman walking her two pointing dogs – one of which wandered away, and spied a group of large shorebirds that the man was unfamiliar with. The beautiful black and white dog then went into a full, rigid point. The woman called and called her dog, which stood its ground – as if to beg the woman to come and flush the birds. But finally, the stately English Setter gave in, and left to join it’s master – the shorebirds, still standing on the shore near me. The man thought it a bit disappointing, wanting to see what the dog would have done had it’s master joined it in it’s own hunt, and also feeling the disappointment the dog must have known, having to leave the birds without the thrill of the flush.

The mans stomach growled. It reminded him that lunch had been meager, and it must be getting nigh onto dinnertime. Time to call it a fishing trip – for the salmon would be more numerous tomorrow, and perhaps, the conditions would be better too. He bent to wash his prize salmon in the salt water, laid his rod beside the fish, and looked up to see a beautiful reflection of sky and mountains in the now calm pool of water. He reached for his  camera… 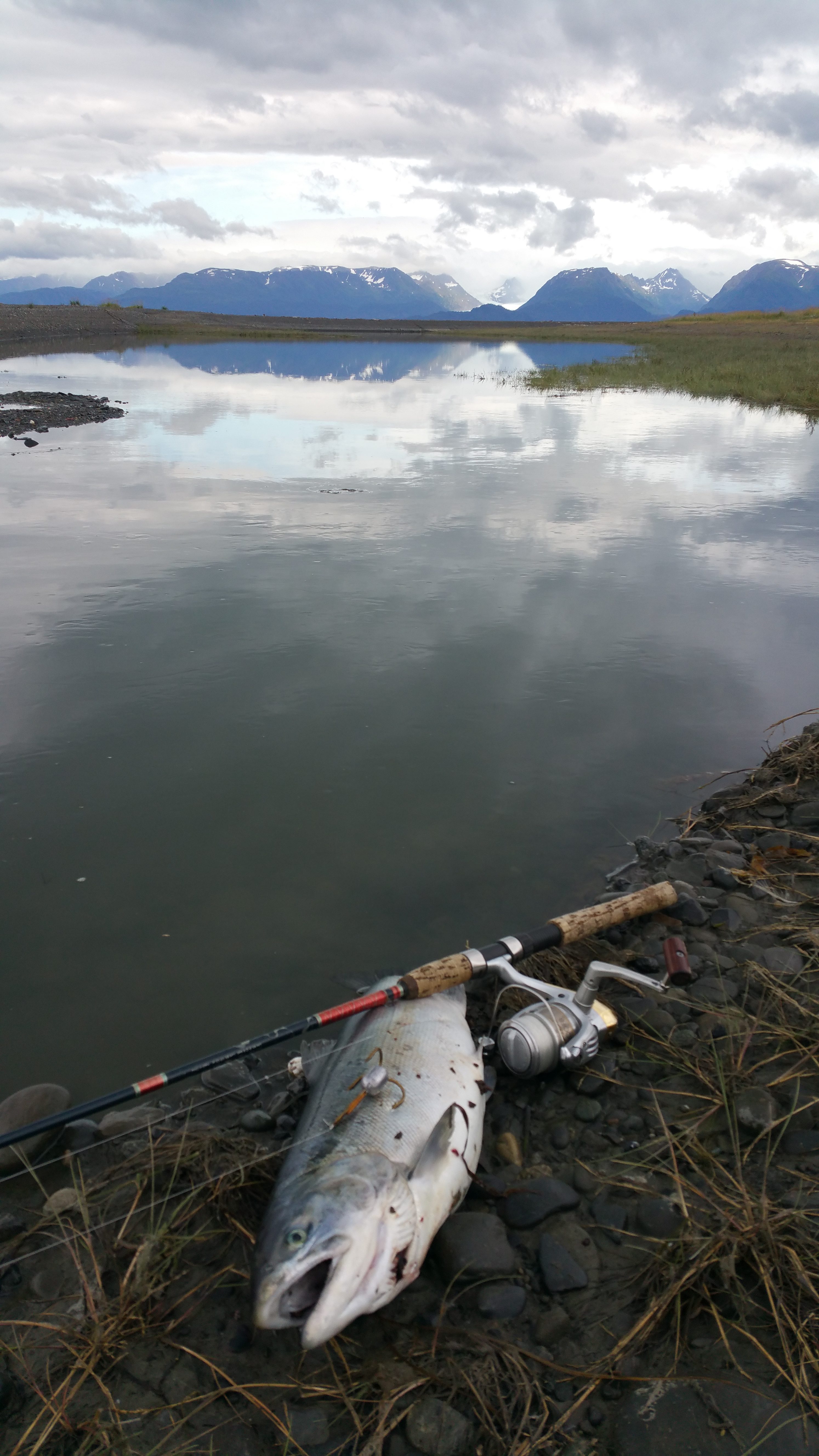 1 thought on “My Personal Favorite Way To Fish Alaska: Snagging Silver Salmon on the Homer Spit”