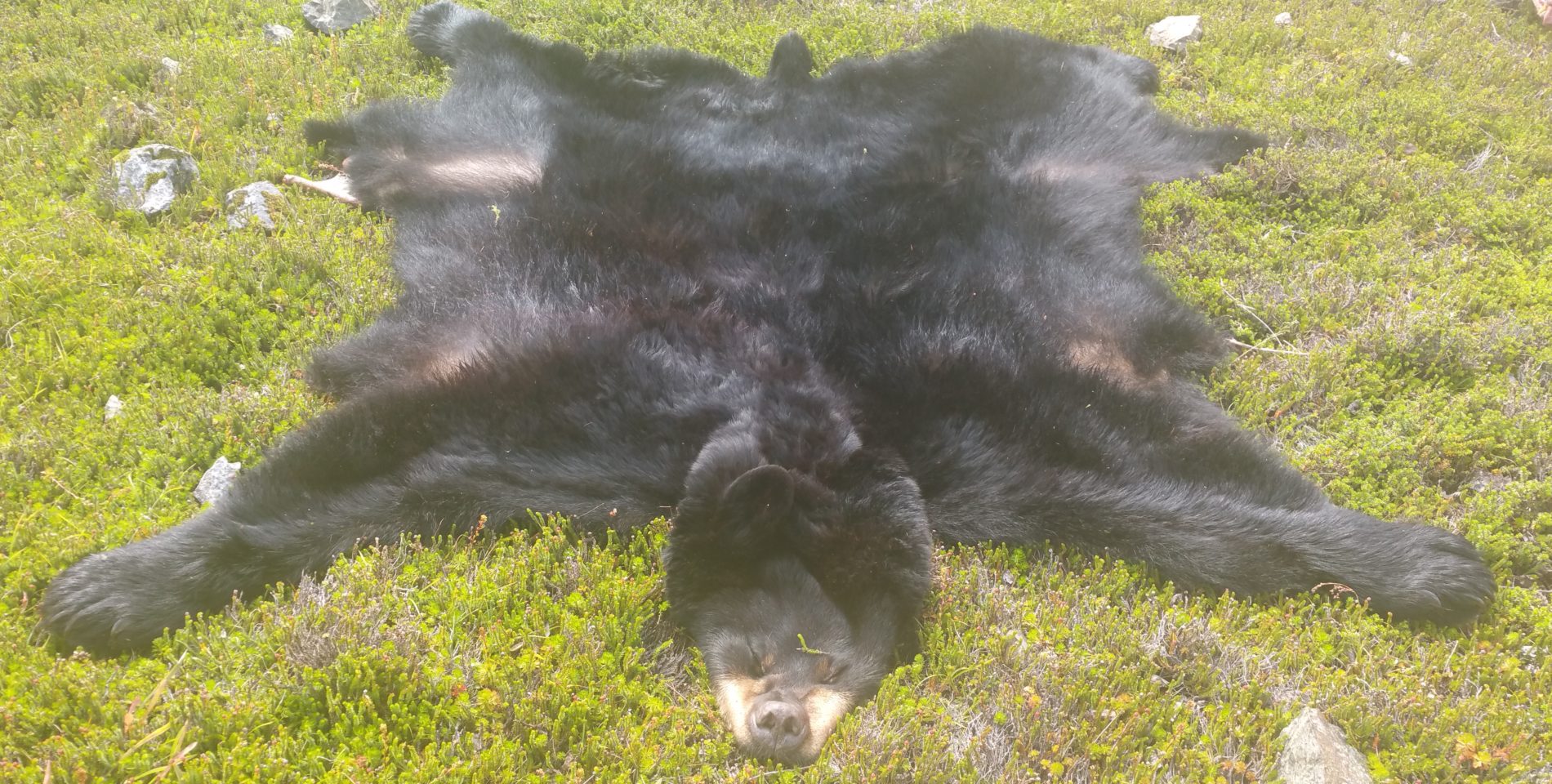 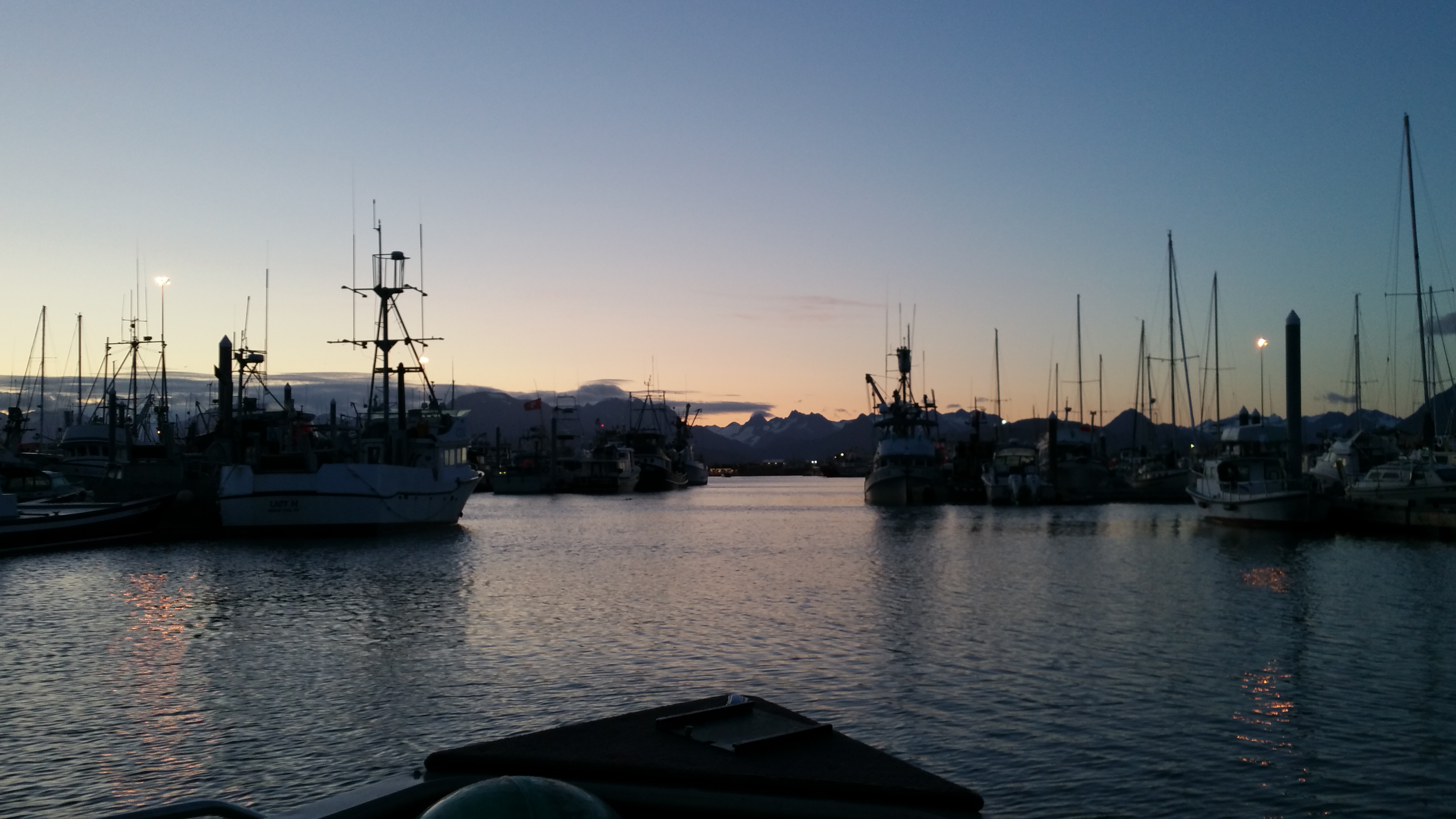 Leaving the harbor from Homer, Alaska at the butt-crack of dawn. Clear skies and calm seas has me hopeful for a perfect day! 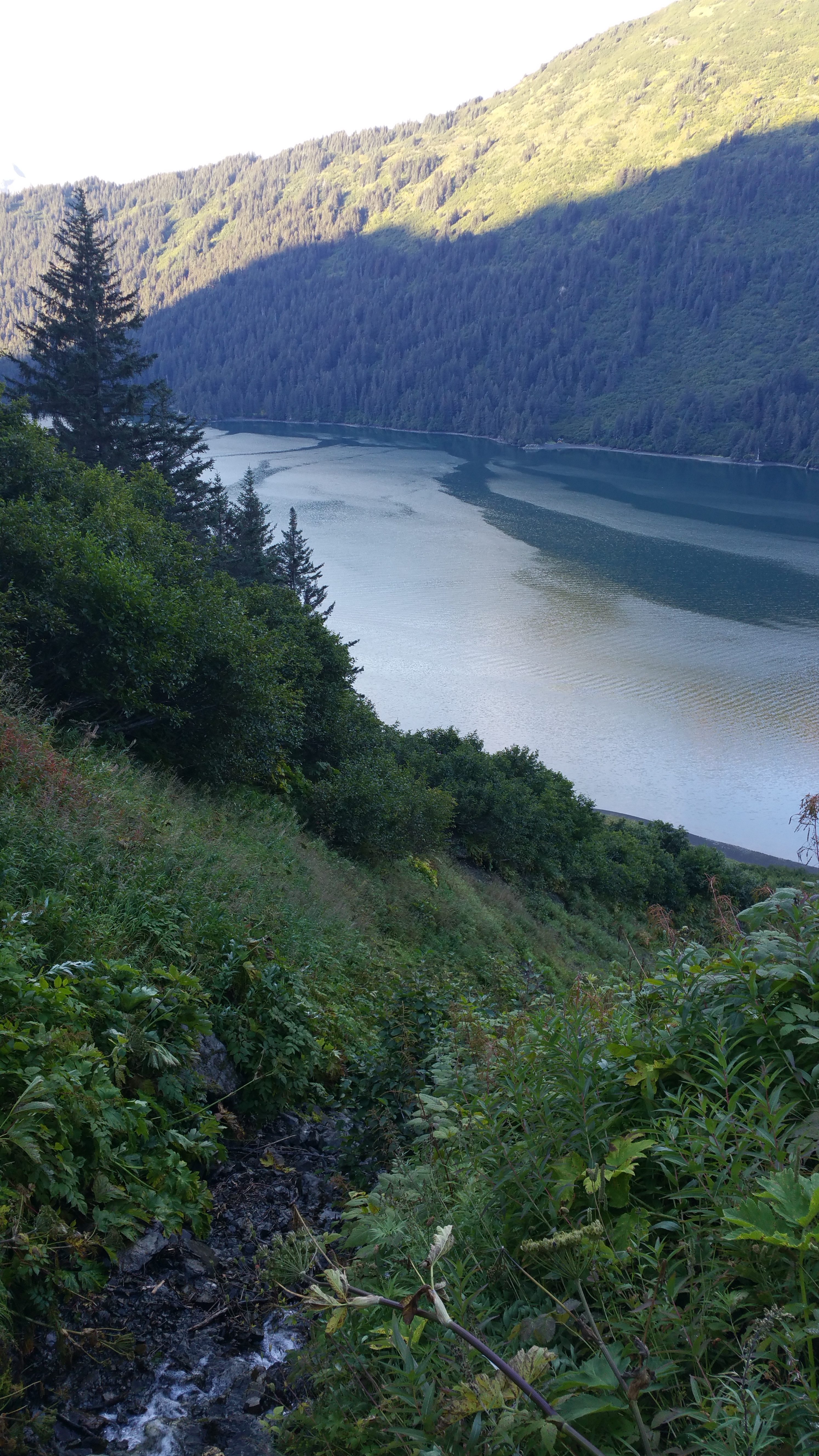 I’m hiking up a mostly dry avalanche chute. It’s full of snow and ice in the winter and spring. It flows with some snow melt and rain water run-off in the summer and fall. I’m just starting to gain some elevation – but I keep pausing to photograph my journey with my cell phone. 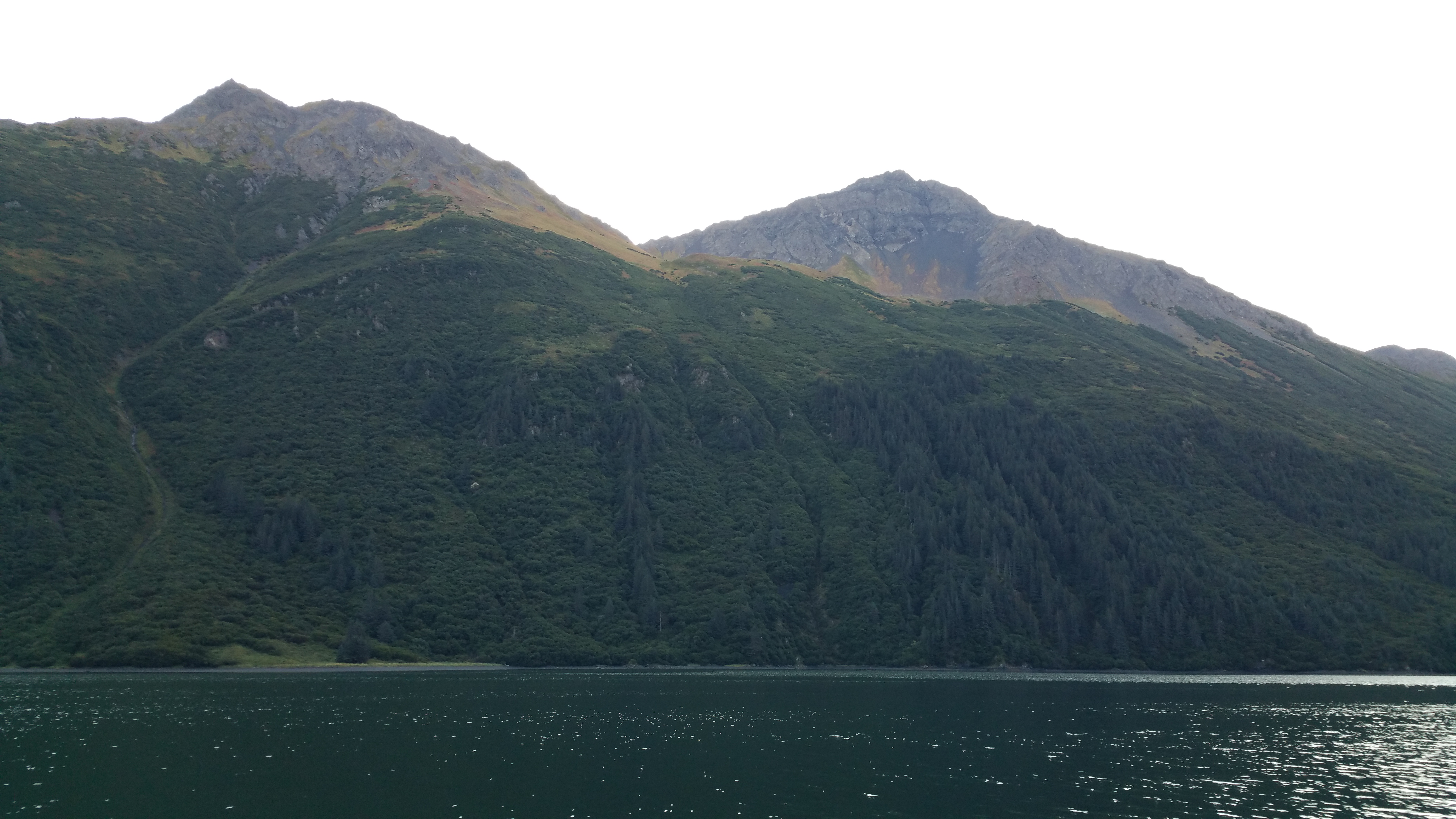 At my spot as the sun is just beginning to light up the hills. With my binoculars, I can already see several bears coming out of the thick alder trees, heading up to feed on blueberries. But, they are way up high, and it will take me at least 3 hours to get up where I can see them again. 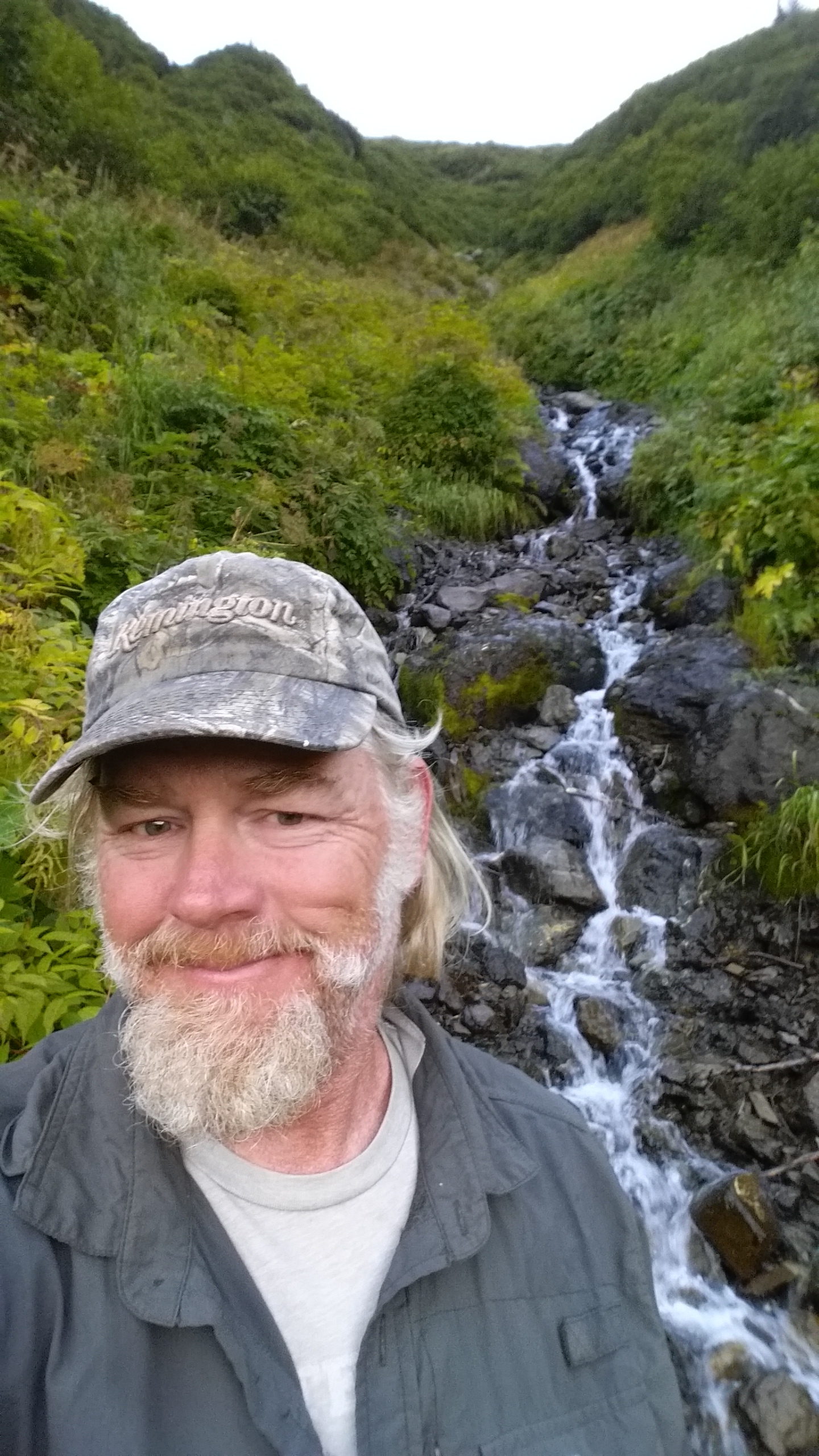 See the big boulders? At first, the avalanche chute was dry – but as I got up higher, water starts to flow from the rocks. That means it disappears underground between me and the ocean. Interesting, huh?

Up above tree line now. Getting quite the elevation and quite the view!

This is about the time I asked the hikers above me to go higher and please b quiet. I slammed a bottle of gatorade, ate a snickers, and took off like the roadrunner. 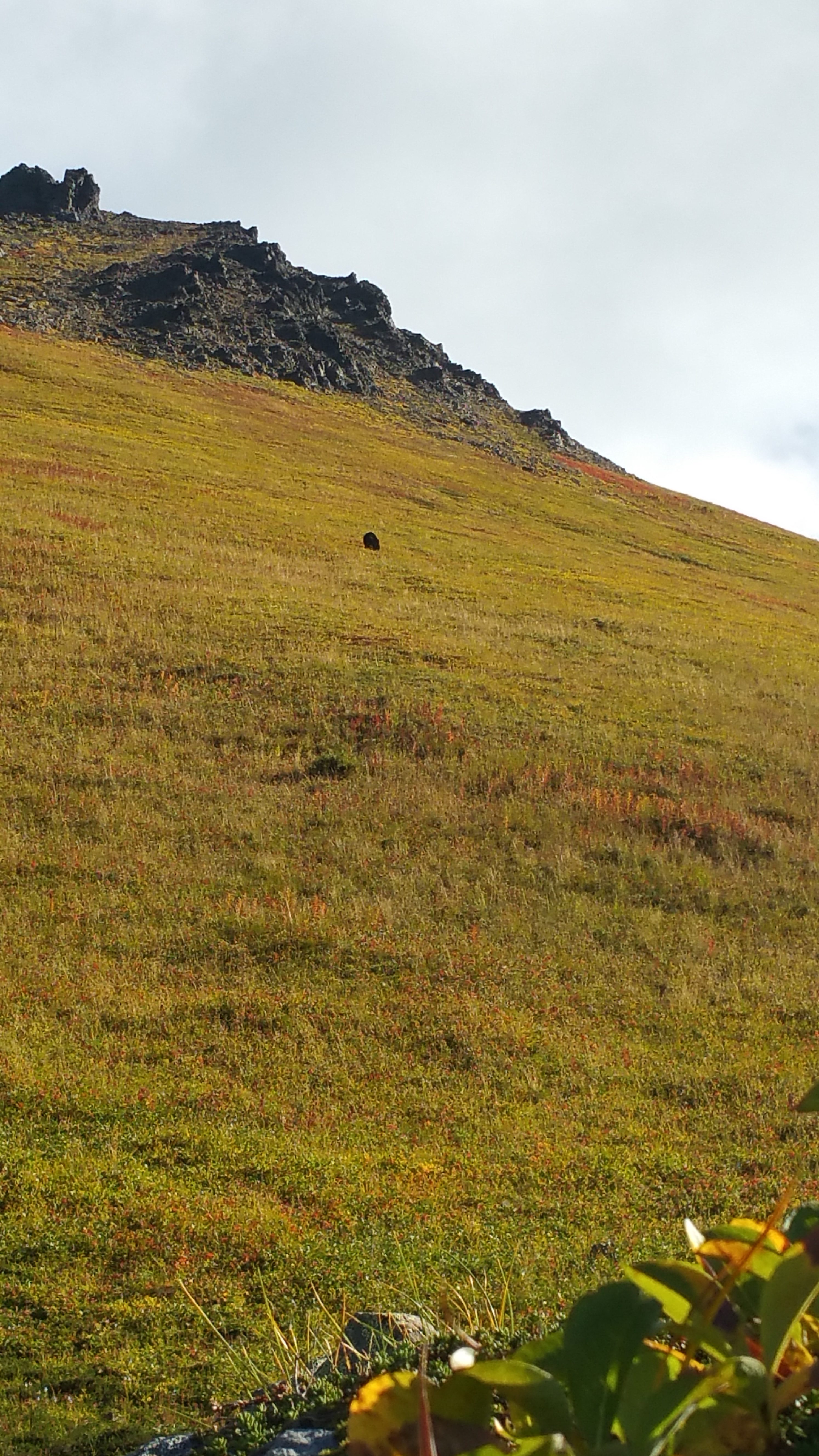 This is the very same bear I saw with my binoculars from down below. I have snuck within 130 yards, and took his picture with my cell phone. There is nothing now between me and the bear, but some very short grass. See how high he is? Right below the rocks where the mountain goats hang out. Time to shoot!

Big Bear Down! One shot through the high shoulder and spine did the trick, but I hit him again the moment he stopped rolling, just for insurance. It was a super quick, humane kill. Notice the big head, spread out ears, short/blunt nose. Selfie with the forbidden bear and I. Guess he wasn’t so forbidden. He just took some hard work and some time. Notice the huge hind end on this beast.

A similar shot without me in the photo shows the extent of the hind end and big back feet. I estimate that this bear weighed about 450 pounds – give or take. Now that’s a big front foot. Notice the huge, hooked claws the bear uses for climbing, digging, rolling over logs and boulders, and of course, fighting.

I keep trying to photograph the bear from different angles – showing all aspects of the bear in his natural habitat, and all of his best assets. This shot shows the thickness of his back – which sat 15-18 inches off the ground. If I lay on my side, I’m not even close to that thick 🙂

A different angle showing the huge, rocky cliffs behind my bear. Another cliff where I often see mountain goats during summer. Here’s a look at his big canine teeth. About now, the couple has made it to the top of the ridge, and is on their way back down. They peek over the hill to make sure the coast is clear, and I wave them down as my hunt is over. Then I ask them to take my picture with the bear.

Now I’m going to walk away from the bear for a little bit. and enjoy some of the mountain beauty, fall colors, flowers, look at the views, scout country, etc. Here are some bright red flowers – I’m not sure what species. Can anyone help?

And beautiful blue flowers. Again, I don’t know the species. Can anyone help?

Here’s what the bears are after – mountain blueberries. They are so thick you squish 10-20 with every step. Plus, there are at least two other species of berries up here as well. Red, and much darker blue/black. The bears eat them all…

… as shown in this bear dookie – which is EVERYWHERE! There’s undigested berries in there – which causes me to think there’s not much chewing going on. It’s just a non-stop conveyer belt.

A view down to the tidal flats below, and the opposing mountain top.

The other direction – farther up into the bowl. More bears were up here, that came streaming down when they got pinned between myself and the other hikers. Someday, I will go over that ridge and see what’s on the other side. Probably some more prime bear country!

After my little hike and photo session, I returned to skin the bear, butcher, and bone out the meat. The hide is over 6-foot square, a real giant for a black bear. Afterwards, I filled my pack as full as it could go, loaded it onto my back, and began side hilling, backtracking the way I had come. The forbidden bear is now in my possession! All I have to do it get it back down to my boat. But the load is heavy and the way is most difficult – bad enough for a man just carrying his own body, let alone that of a giant bear. See if I can get it done. Stay tuned for The Forbidden Bear, Part 4: The Descent.